A lot of new distilleries have been opened in recent years, but there are only a few that I actively follow. Dornoch, for example, is one of them, but so is Ardnamurchan, the distillery of the bottler Adelphi.

In May, I finally visited the distillery, a highlight of my holiday. Located at the most westerly point of the British mainland, it’s a long drive to get there, but in my opinion, it’s more than worth it! I really enjoyed looking around there and, of course, tasting some excellent whiskies. A great day and I hope to go back there someday.

Anyway, that was a few months ago. And that also applies to these two bottles that have been in my cabinet for a few months, which I hadn’t gotten around to reviewing yet. Time to catch up!

So the first Ardnamurchan I’m going to taste is the AD/10.21:06, which is the last in the series I’ve reviewed two releases of before. I thought both were pretty good, so I’m curious if this one is as nice as the other two.

Like the previous editions, this Ardnamurchan also matured in 65% ex-bourbon casks and 35% ex-sherry casks before being bottled at 48.6% ABV.

Nose: a hint of burnt rubber at first. Then a whiff of smoke and a lovely salty sea breeze. Oranges and peaches, but also pears. Then a citrus note, which is followed by caramel.

Taste: a hint of smoke, mixed with sea salt. Lime and oranges. Pears, but also apples this time. Then I get a hint of minerals. It is slightly oaky which brings out black pepper and cinnamon.

Finish: mid-long to long with pepper, cinnamon, but also peaches and a hint of dark chocolate.

A little different from the previous two editions I tasted, as they both had some berries in them. The sherry influence feels a bit less here and this one also seems to be a bit more fruity than the previous ones. But again quite tasty!

This second Ardnamurchan was bottled at cask strength, and I’ve never had that before. It also has a different mix as it is made from 50 casks, 45 ex-bourbon, and 5 ex-sherry. 40 of these casks were filled with peated whisky, and 10 were unpeated. An interesting mix in theory, so let’s see what this brings. Bottled at a strength of 58.7% ABV.

Nose: quite smoky this one. Which is followed by chalk and a salty note. A little bit of vanilla and a hint of oatmeal. I almost get a smouldering bonfire at this point. Candied lemons, but also oranges. Green apples.

Taste: less smoke than the nose suggests, but it certainly there. Creamy vanilla and cotton candy in the back. Chalk. Lemons and oranges. A good pinch of sea salt, before it gets a bit peppery.

Finish: mid-long with quite some pepper, salt and vegetal peat.

Possibly the best Ardnamurchan I’ve tasted so far. Rather flavourful and punchy, with the right amount of peat. It’s just really well done. If you haven’t tried it yet, it’s still for sale in some places. 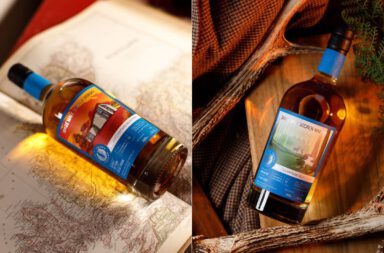