Today I sit down with a Glen Elgin 1995  from the Creative Whisky Company. It is a bit of the same story as with the Teaninich that I reviewed last Sunday, since Glen Elgin is also a major contributor to blends. Only this whisky is mainly used for White Horse.

The Speyside distillery was founded in 1898, right before the whisky boom bubble burst. In the middle of a crisis it took two years to finish the distillery and in May 1900 they could finally start production. Unfortunately, it didn’t last long and they were forced to close the distillery down just a few months later. The distillery was sold in 1901 but it failed again. So after being mothballed twice it was again sold in 1906. From there on, things seemed to change. Especially when it joined DCL around 1930 and was licensed to White Horse Distillers. Since then, the bulk of whisky production is used for blending, particularly in the White Horse blends.

This Glen Elgin has matured for 16 years and is bottled 50% ABV. There were 224 bottles available.

Nose: Plums, chocolate, rum raisins, toffee and some tobacco. Pretty straight forward actually. Maybe some coffee beans, a bit flowery. Not overly sherried which is a good bonus. Some spices later on, somewhat dry and lot’s of cacao.

Taste: Plums, balsamico vinegar (the good ones!), toffee and dark chocolate. A touch of honey, some wood. Milk chocolate which may sound weird as I also get dark chocolate. But there is something creamy going on. The nose suggests a dryness but the palate is not close to being dry.

Finish: The finish is mid-long. Again with plums and dark milk chocolate for the creamy aspects. Also a bit peppery after a while.

I like the medium sherry influences although the colour might suggest that it is a heavy sherry bomb. It is very well-balanced, sweet and nicely sherried. It reminds me of the 16 year old Managers dram, but a little bit lighter on the nose and taste. 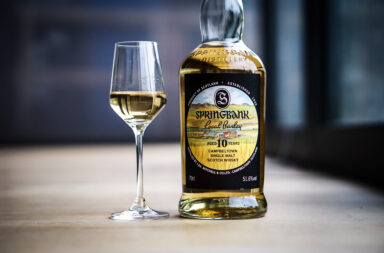