This Tullibardine 2008 – The Murray is my very first review of this Highlands distillery! Funny that this one hasn’t come up before after so many years. But it’s always nice to be able to discover something new.

The Murray is a limited edition (and also the only one?) in the Marquess Selection. It consists of different single malts, mainly using different types of finishes. The series is quite diverse, and there seems to be something for everyone.

This Cask Strength Edition is perhaps the most ‘natural’ one on the list. Where other releases are primarily finished in wine casks (Marsala or Châteauneuf-du-Pape, for instance), this one is entirely matured in a 1st fill bourbon barrel. And on paper, this was the closest to my own taste. Because a maturation in bourbon barrels is often my preference, especially if it is also bottled at cask strength. Let’s see how this one tastes.

This Tullibardine is bottled at 56.1% ABV.

Nose: it starts with a good drop of vanilla. Then yellow apples. A hint of banana candies as well as cotton candy. A little bit of honey. Coconut in the back. And a delicious lemon sponge cake.

Taste: creamy vanilla mixed with the same banana candies as in the nose. Yellow apples too. Then a hint of candied lemons and maybe even some pink grapefruit as well. Followed by a little bit of mint and caramel toffee. Some cinnamon and also a pinch of white pepper.

It may not be very complex, as it is relatively straightforward, but it is pretty enjoyable. It is an easy-going single malt that is dangerously drinkable, as it doesn’t need any water despite its high ABV! 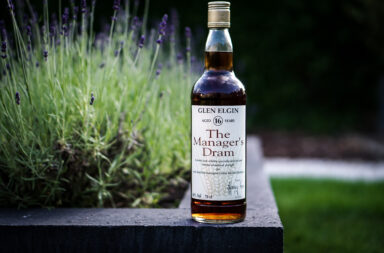